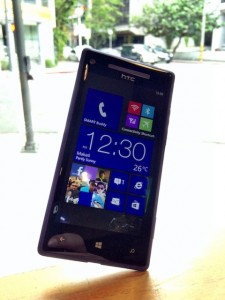 Before Android became popular, Microsoft’s Windows Mobile was the preferred platform by HTC for its line of smartphones like the HD2, Touch Diamond and its variants with carrier partners like AT&T and Vodafone. In 2008, they started producing Android-powered Smartphones and the partnership with Microsoft had to take a backseat while they fix their outdated mobile operating system. Now that Windows Phone 8 is already out, HTC is back in the Windows Phone market by releasing the HTC Windows Phone 8X.

The HTC Windows Phone 8X somewhat reminds of the Nokia Lumia 800. Aside from the rectangular design, HTC took a page from Nokia’s book and came up with vibrant colors like the California Blue variant we have here. The 4.3’ screen is smaller than the 4.7” screen of the HTC One X but the size is still large enough for viewing websites and multimedia files thanks to its 720×1280 display resolution. It’s made of Corning Gorilla Glass 2 and while I’m aware that it is not scratch proof, my unit sustained one at the lower part of the display where the touch panel is found.

Unlike the Lumia, the 8X is more comfortable to hold. The combination of its curved back and soft-touch finish is a welcome change from those slippery plastic finishing of other smartphones I have used before. The 8X’s unibody construction means that the battery is not removable and storage is non-expandable. The SIM-Tray is found at the upper right corner and a pin is needed to eject it.

The HTC 8X sports a Qualcomm S4 1.5 GHx Dual-Core Processor. Dual-Core? Why not Quad-Core? In all honesty, the Dual-Core processor of the 8X works just fine. In fact, I find it almost perfect for the Windows Phone 8 user interface.  Everything worked so smoothly and not even a bit of lag. I reckon it may have something to do with the operating system but I’ve read somewhere that there were other Windows Phone models (with slower Qualcomm processors) that suffer lags once in a while. I guess HTC made a good decision to choose this type of processor for the 8X.

This is my first time to try out Microsoft’s latest mobile platform since Windows Mobile 6.5 was released 4 years ago. The setup process was pretty easy – I added my Windows Live ID, my Contacts, Calendar and 2 E-mail accounts from Google, my social network accounts and went on to use the Windows Phone 8X as my daily driver. Social networking is already embedded in Windows Phone 8 so even if I haven’t installed my apps yet, I was able to post my Facebook and Twitter updates.

The homescreen composed of Live Tiles offers a refreshing look after years of using Android smartphones and iPhones. Aside from adding or removing shortcuts in the homescreen, the tiles can be rearranged and resized according to your preference. Navigating the Windows Phone 8 platform is not too hard, but you have to get used to its way of closing apps. Instead of simply placing an “X” button (to close the app) on the upper corner of the screen, you have to press the back button continuously until the app is no longer showing up. This is inconvenient especially if you have opened a lot of windows within the app. I was pleased to learn that I can still multi-task with Windows Phone 8. All I needed to do is to press and hold the back button and all of my open apps will appear where I can switch to another app or swipe to close it.

Users who need Microsoft Office on their smartphones should look no further as the 8X has a built-in set of Office Mobile apps including Word, Excel and PowerPoint. You can’t find a set of MS Office apps in other smartphones unless they are bundled for free or purchase a third-party version.

The HTC Windows Phone 8X has an 8.0 Megapixel camera at the rear and 2.0 Megapixels at the front. Overall, I find the cameras quite well as long as the lighting conditions are good. It’s a different story under low-lighting conditions, and I would rather use my iPhone 5’s camera to take pictures than the 8X. I have noticed that the 8X has a light-flaring issue as seen in one of the sample photos I’ve taken.

The battery capacity of the HTC 8X is 1800 mAh. With e-mail and social network notifications turned on while connected to 3G data, my average use lasts almost 9 hours. If you want longer battery life, I suggest you turn off your notifications.

After using it for almost a month as my daily driver, I think the HTC Windows Phone 8X is a great smartphone. It would have been greater if the apps that I use on my iPhone 5 are also present in the Windows Phone Marketplace. If you’re the type of person who wouldn’t rely much on apps and would want to be different from those Android and iOS users, then this phone is for you.

First Look at the HTC One | DR on the GO

[…] up with great designs for their smartphones (previously, I’ve reviewed the HTC One X and the HTC Windows Phone 8X) and they have absolutely got me attracted with the form factor of the HTC One. It looks longer and […]

[…] Gorilla Glass 2 which is supposedly scratch resistant but after my unfortunate experience with the HTC Windows Phone 8X, I’d rather be careful with the screen this time. Colors look great on the Lumia 720′s […]