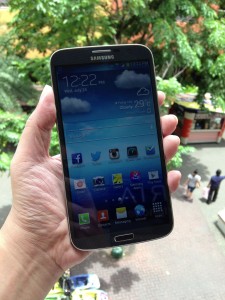 There was a time when phone brands kept on producing smaller phones until users found them uncomfortable to use. Nowadays, it’s the other way around. Not too long ago I heard some people complaining about 4.2″ screens being large. I wonder what complaints they would be making now with these phablets in the market.

I am one of those who thought there shouldn’t be phones that have more than 5″ of display. I even declared not getting a Samsung Galaxy Note 2 because I think it was just too big to use. Did I change my mind when I reviewed the Samsung Galaxy Mega 6.3? 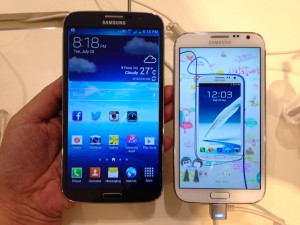 The Samsung Galaxy Mega is the biggest smartphone or phablet I have ever held at the moment. Its massive size dwarfed my iPhone or any smartphone I pit against it. Overwhelming, perhaps too overwhelming. I set my negative views about its size aside and started to use it. The weight is surprisingly lightweight for its size and I didn’t have any complaints about it during the course of my review.

Can it fit in my jeans pocket? Believe it or not, the Galaxy Mega can fit into the pockets of my 3 pairs of straight-cut jeans. The top of the phone however peeks out of these pockets.

Do I look silly using it as a phone? A little bit I guess, but I look less of a dork than using a 7″ tablet behind my ear. 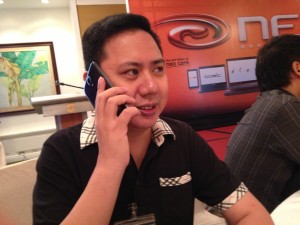 Even with my big hands, I found it hard to use the Mega with one hand. Most of the time I had to use my other hand so I can type or navigate properly. Unless you’re an NBA-sized person, the Mega should be used with 2 hands.

I always refer to the Galaxy Mega as an oversized Samsung Galaxy S4. It’s obvious that Samsung took the design cues from the S4 and apply it to the Mega. I’m glad that the Mega is not thick which would have added an unnecessary bulk to that oversize phone.

We can complain all day about the size of our big phones, but the good side of having one is its big screen. The size of the Samsung Galaxy Mega’s screen display is  6.3 inches with a resolution of  720 x 1280 pixels. I know this could be better but I’m somehow convinced that it’s good enough. Samsung didn’t supply the Mega with a Super HD AMOLED screen and opted for an HD Super Clear LCD instead. It didn’t really matter to me why they didn’t choose the former as I’m already satisfied with the current screen quality. 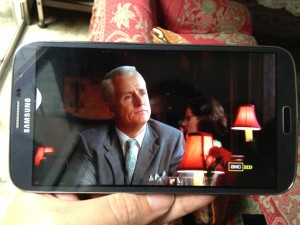 The very large display of the Galaxy Mega enticed me to watch my favorite TV series on it. My friend and I watched a video on it recently and the experience was certainly better than sharing a 4.8″ screen. We didn’t need to move our heads closer to the phone, meaning the large screen lets us watch it from a comfortable distance and at the same time not worry about the viewing angles. 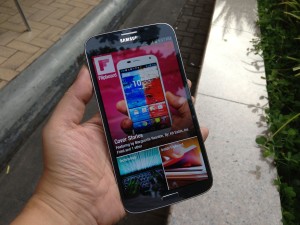 I took advantage of the Mega’s megascreen to use other applications like Chrome and Flipboard, which by the way is so nice to use on a 6.3″ display. One of Samsung’s gimmicky features, the Multi-Window works perfectly for a large screen like the Galaxy Mega. Multi-Window lets me maximize the humongous screen of the Mega by opening 2 apps simultaneously. 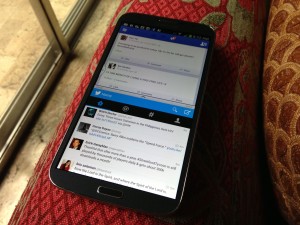 PROCESSOR IS NOT SO MEGA

I expected the Galaxy Mega to have the same processor as the Galaxy S4. Instead, Samsung has chosen a dual-core Qualcomm processor to power up the Mega and I was really pleased with its performance. It juggled my apps most of the time without  issues and it never crashed on me. The 1.5GB of RAM obviously helped and I’m glad Samsung was generous in that section of their smartphone.

I played a few games on the Mega like Asphalt 7 and the gaming experience was also better than my Galaxy S3. My basis for this is not just the capable processor by Qualcomm, but also to the phone’s size which was easier to hold for playing games like Asphalt 7. 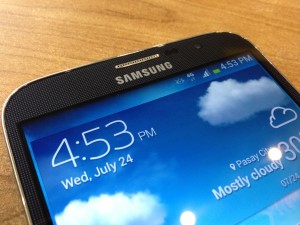 The Samsung Galaxy Mega may not have Super AMOLED HD or a Quad-Core processor, but at least it has LTE. Thanks to Smart’s LTE connection, I was able to use the Galaxy Mega to upload photos and videos on Facebook, Twitter and Instagram during the recently concluded FIBA Asia games. While some people in our row were having a hard time uploading, I was able to upload mine in an instant. Oh, and in one meeting I had during that week, I was able to record this speedtest on the Galaxy Mega in one of the offices along Makati Avenue. 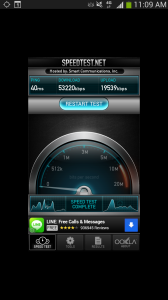 That’s way above the maximum LTE download speed that Smart is advertising! Too bad I can’t download stuff during our meeting.

The Samsung Galaxy Mega can take decent photos with its 8 Megapixel camera on well-lighted and outdoor areas. Here are some samples: 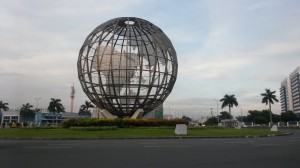 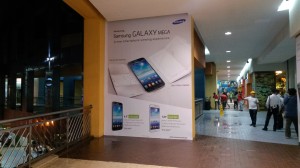 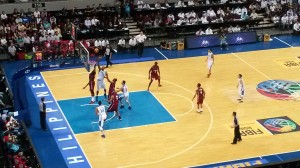 The larger the phone, the larger the battery life should be and I’m happy to say that the Galaxy Mega didn’t disappoint. 3 days of heavy usage with LTE on gave me an average of 9 hours, while my normal usage averaged 14 hours a day, also with LTE on. Very, very impressive I must say! I have never used a smartphone with LTE connectivity that last this long. The 3200 mAh battery Samsung supplied for the Mega is a big factor to make the usage longer.

It seems not all apps are optimized for the 6.3″ screen of the Galaxy Mega like the screenshot of my speedtest app above. It may be possible that Speedtest is the only app not optimized for it as other apps I have used were able to display properly. Another issue I’ve encountered was with Instagram which either crashed or it became too pixelized whenever I switch to video. I am not sure if mine was an isolated case, but I’m certain it can be fixed. 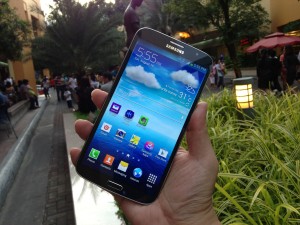 My experience with the Samsung Galaxy Mega changed my perception on phablets. I learned to look beyond the size and appreciate the advantages it can offer. I said before that Samsung has gone nuts for releasing a 6.3″ phablet. I’m glad that they did, because I now think that Samsung has raised the bar in producing them.

For a phone this big, the SRP of Php 23,990 is inexpensive compared to the Galaxy S4. Smart’s All-In Plan 1200 offers a LTE 995 Flexibundle that can let you have unlimited data for 30 days. That’s an affordable plan if you ask me.

Phablets are not for everyone, but if you would like to consider on getting one, I strongly suggest the Samsung Galaxy Mega 6.3.

* Special thanks to Samsung Mobile Philippines and Smart Communications for loaning me a review unit.

I’m not satisfied enough in this phone! maybe i just expect to much athought It can be at the same level of samsung S3 but anyway it still a superb phone if you ask mhie I just think samsung s3 is a much better. I just bought it online here : https://www.goods.ph/Samsung-Galaxy-Mega-6-3-I9205-4G-4497.html

[…] Overall, the phone itself is very sleek, with its rounded corners and thin profile. Due to its size, its not very easy on the hands. It would need some time to get used to holding. The size does remind me of a “phablet” that became en vogue a few years back, just like the Samsung Galaxy Mega. […]