Samsung Galaxy Note 9: The S Pen Is Mightier Than a Sword

The latest flagship of Samsung was finally unveiled. The Samsung Galaxy Note 9 comes with improved features that were first introduced in the Galaxy S9 and S9+. These are not major upgrades, but they are essential as part of the Note 9’s identity. 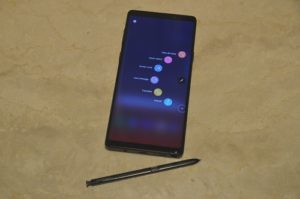 The major improvement of the Galaxy Note 9 is not in the phone itself, but in the S Pen. We’ve seen improvements on the S Pen over the years but this time, Samsung made it more useful than just writing notes.

The S Pen now comes with Bluetooth connectivity which can be used as a remote control for the Note 8’s apps. Users can click on the S Pen’s button as a remote camera shutter button, or move to the next slide of the presentation deck. The S Pen can be charged whenever it’s placed within the stylus silo.

The S Pen is also available in other colors but only for the 512GB variant. 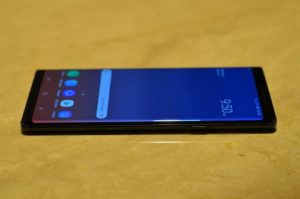 Screen is slightly bigger than the Note 8 by 0.1 inch. Under the hood is similar to the Galaxy S9 – a Samsung Exynos 9810 Octa-Core processor which will be available in Europe, Middle East and Asian countries. US customers will get a faster Qualcomm Snapdragon 845 processor in their Note 9s. Storage and memory are now a lot bigger, with 128GB as the minimum storage and 6GB of RAM. Those who clamor for much bigger storage can opt for a 512GB storage and 8GB of RAM. And if users want even more storage, the Note 9 is capable of handling up to 1TB Micro SD. Mobile gamers who want to use the Note 9 for gaming will be glad to know that the phone has a built-in water carbon cooling system. This will ensure the phone stays cool even when the game’s graphics become demanding.

Remember Samsung DeX? DeX was introduced two years ago with the Note 7 which gives the user a desktop experience when placed in a DeX dock. This time, DeX is already built-in to the Note 9. All you need is an HDMI connector and the Note 9 will project a desktop screen to the TV or monitor. This will definitely be useful for business presentations especially with the help of the S Pen as a remote control. 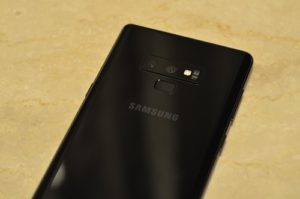 The cameras are similar to the Galaxy S9 Plus. It now comes with scene detection which is able to intelligently detect various environment that will give the best image result. I’ll post some sample photos in my First Look post.

The Samsung Galaxy Note 9 price is P55,900 for the 128GB/6GB variant and will be available in Midnight Black, Ocean Blue and Metallic Copper. The 512GB/8GB variant will be priced at P75,990 and will be available in Ocean Blue but only in limited quantities. Pre-order of the Galaxy Note 9 will start on August 11 until 19. Ordering a 512GB/8GB version will fetch you a FREE 32-inch Samsung Smart TV, Nanofixt screen protector and 1 year screen cracking insurance.

Choose Joy this Christmas with OPPO

[…] Smart Samsung Galaxy Note 9 was revealed last August 9 in New York. The main feature of the Note 9 is the advanced Bluetooth S-Pen, which […]

Enjoy Discounts up to P5,000 on The Great Samsung Blue Sale! • DR on the GO • Tech Review

[…] from big discounts, Samsung is also offering exciting promo bundles. Buy a Galaxy Note9 from September 7 to 16 and receive a free Galaxy Tab A 7.0. A Galaxy J7 Core or J2 Pro bought from […]

The Samsung Galaxy Tab A 10.5 is Now Available for Purchase • DR on the GO • Tech Review

[…] X is hotter than the OnePlus 6 on long gameplays. It doesn’t have a cooling system like the Samsung Galaxy Note9, which is not really a gaming phone but comes with it anyway. If you’re not into gaming, then […]